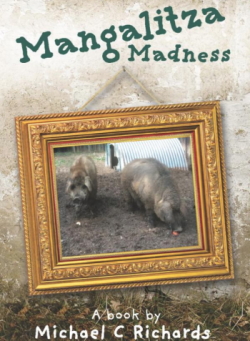 This is the world’s first autobiography written through the eyes of two pigs, Percy and Rupert.

This is the start of their life’s journey with the Richards family and their surrounding environment.

It is a true story but whereas before Facebook friends and family were entertained by the pigs’ exploits on social media, they are now committed to print.

The pigs were celebrities not only locally but also worldwide. Their fan club numbered nearly 4,000 people, from Hong Kong to Tennessee in the United States.

In this first instalment of their exploits, Percy is the narrator. Later on, as the pigs developed and Rupert was able to contain his love life, he will add his contribution.

We all hope you enjoy their outlook on the beginning of life’s journey.

This is adorable! Handwritten & with a wonderful young imagination.

Bookworm, November 2019
Amazon, Paperback
MORE REVIEWS
Scroll
We use cookies to ensure that we give you the best experience on our website. If you continue to use this site we will assume that you are happy with it.Ok